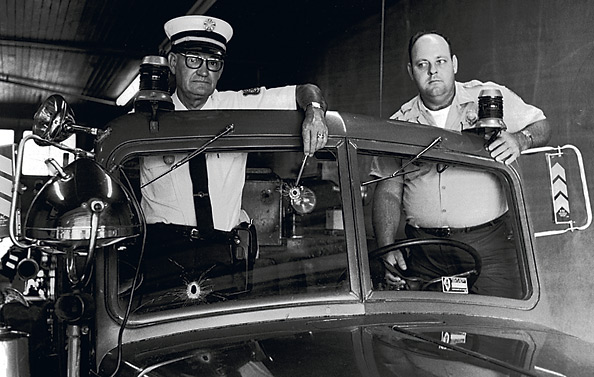 FBI Turned its Back on Death in Cairo Jail

Three days after Pfc. Robert L. Hunt Jr. was found hanged in the Cairo jail in the summer of 1967, the FBI decided not to investigate allegations of foul play for fear the investigation would fuel the riots sparked by Hunt’s death. As a result, federal authorities never have investigated the allegation that Cairo police violated Hunt’s civil rights.

That is just one of the disclosures in FBI files obtained under a Freedom of Information Act request filed by the Southern Illinois University Carbondale School of Journalism as part of The Cairo Project.

An investigation of the death also uncovered these additional facts that raise questions about the police story that Hunt hanged himself that night:

• Witnesses who viewed Hunt’s body saw bruises indicating he had been beaten.

• The police claim that Hunt was picked up because he was absent without leave appears to be contradicted by military documents praising his service.

• Relatives say that Hunt was in good spirits and in no way suicidal before his visit to Cairo.

• The wire mesh at the top of his cell could not have supported Hunt’s weight.

• FBI files quote a cellmate saying Hunt hanged himself, but the FBI apparently did not interview the cellmate or obtain an explanation of why the cellmate would not have called out for help.

In the early hours of July 16, 1967, Preston Ewing was jolted from sleep by his telephone ringing. As president of his local chapter of the National Association for the Advancement of Colored People, Ewing was well aware that mounting tension between Cairo’s white and black citizens, compounded by a lengthy and severe economic decline, created a combustible situation. As Ewing tensely lifted the receiver around 2 a.m., his worst fear became reality. There was a body…a teenaged African-American soldier…hanged himself in jail. As Ewing listened to the caller’s report and heard the words “black,” “hanging,” and “police,” he was immediately skeptical and, as word of the death spread, so too was Cairo’s African-American community. As Ewing told the Cairo Evening Citizen at the time, the “death was the spark that kindled the long-simmering resentment into open and violent protest.” Riots followed, then a years-long boycott of white businesses and a backlash from the segregationist “White Hats.”

While the Civil Rights Movement changed the social fabric of the United States beginning the in the 1950s and early 1960s, it was excruciatingly slow to take root in Cairo. The antebellum South’s racial attitudes dominated the town’s social, economic, and governmental foundations well into the 1970s. The 1964 saga of the municipal swimming pool illustrates the town’s stubborn opposition to equal rights. The white city government permanently closed the pool rather than integrate it. The result of white obstinacy was that by 1972, despite making up approximately 40 percent of the city’s population, African-Americans did not hold a single city office. The median family income for blacks was $2,800, compared to $6,400 for whites. These figures were compiled as part of a 1973 U.S. Civil Rights Commission study looking back at the Cairo violence. The study quoted Robert Landsden, grandson of Cairo’s first historian, as saying, “There are a lot of white people who would sooner see Cairo float down the Mississippi than give a black man a break.”

Cairo’s police department served as an important tool for the suppression of African-American equal rights, the Commission found. Striking testimony to the Commission in 1972 reflected a police department defined historically by institutionalized racism legitimized by the law. “Black residents have been faced with serious harassment and physical brutality by law enforcement officials (who) have aligned themselves with groups whose purpose is to oppose the enforcement of equal opportunity for all citizens regardless of race,” the Commission wrote. It recommended new legislation giving the state government more authority over Cairo’s local law enforcement, which, it concluded, was “discriminatory and completely unprofessional.”