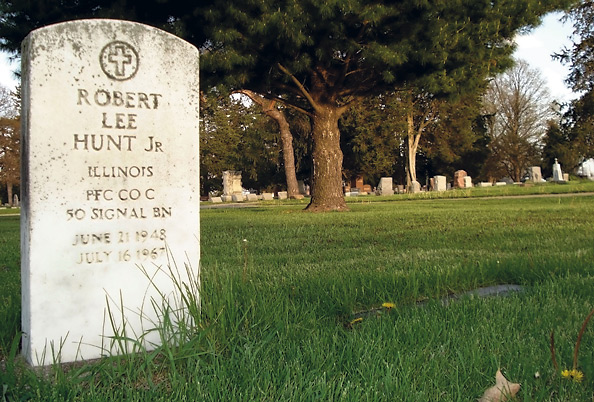 Dr. Crockett won the right to delay burial and personally performed an autopsy in Champaign on Tuesday, July 25. His autopsy report has been lost, however the results were released immediately after Hunt was buried. Champaign’s two local newspapers –  the Champaign-Urbana News-Gazette, and the Urbana Courier – gave conflicting accounts in their July 27 editions. The Courier stated Crockett’s report noted abrasions on Hunt’s “knuckles, left elbow, right knee, and a small recent cut over the left eye.” The Courier also described “no damage to the vertebra and aorta was present…no signs of a skull fracture or unusual mobility of the neck were found.” The News-Gazette reported, “The cause of death in this case is clearly one of hanging, probably by the mechanism of strangulation. The breadth of the neck burns suggests a noose of rather non-compact material.” Despite Hunt’s injuries as reported in the Courier, the News-Gazette story said, “the autopsy showed no evidence of any severe beating or struggle.” Hunt’s grandmother’s attorney, Stuart Nagel, commented, “The medical evidence could fit either case.” Nagel later said, “I’ve notified the FBI that the report is ready, but they haven’t received word from Washington to conduct an investigation.”

That word never came. Washington was more interested in stemming the violence in Cairo and investigating civil rights leaders. COINTELPRO, FBI Director J. Edgar Hoover’s Counter Intelligence Program, investigated civil rights and anti-war leaders and attempted to neutralize their influence. The full extent of the program only came to light after Hoover’s death. FBI documents show that COINTELPRO efforts were directed at the Rev. Charles Koen, who headed the Black Liberators, a Black Panther-style group in Cairo. FBI documents from 1969 show that Hoover approved an operation proposed by the St. Louis office to send falsified “anonymous letters…(to) his wife regarding extramarital relations.” The hope was to “cause Koen to spend more of his time at home” in St. Louis. The letters were sent and the rumors also were printed in an “underground newspaper” called the Blackboard, which was printed in Springfield, Ill. and distributed in St. Louis.

The Cairo Evening Citizen rarely covered the death of Robert Hunt. One exception can be found as a small side note to the Monday, July 17 headline that read, “Cairo Hit By Wave of Firebombing and Vandalism.” The Evening Citizen included a daily Bible verse on page two of each paper, reflecting the true southern roots of the town. The Bible verse for that Monday was Ecclesiastes 12:14, “God shall bring every work into judgment, with every secret thing, whether it be good, or whether it be evil.”

That judgment has yet to be rendered because of the FBI decision three days after Hunt’s death not to investigate possible civil rights violations. Recently, the Justice Department has begun investigating cold cases from the civil rights era. Repeated calls to the Justice Department concerning the Hunt death failed to elicit a response from the unit involved in those investigations. If a judgment is ever to be rendered in the death of Hunt, it may have to come from that unit.

Despite the uncertainty surrounding Hunt’s death, there is no uncertainty as to his place in the civil rights struggle in Cairo. Ewing, who first saw the evidence that Hunt had been beaten, puts it simply: “Robert Hunt Jr. is the Rosa Parks of Cairo.”

A few years after the end of the civil rights era in Cairo, author Ron Powers gave a glance back at Cairo’s recent history. He called it “a violent and sorrowful little town that lay wedged between two rivers at the southern tip of the state, a place of cruel secrets and gothic ruin, which bore the tragically hopeful name of ‘Cairo’…The town’s sulfurous legacy of corruption, wretched luck and murderous temperament made it seem cursed; a locus of evil. From what I had learned of its present agony, Cairo had the aspect of a crushed snake, waiting for the setting sun to still its thrashes.”