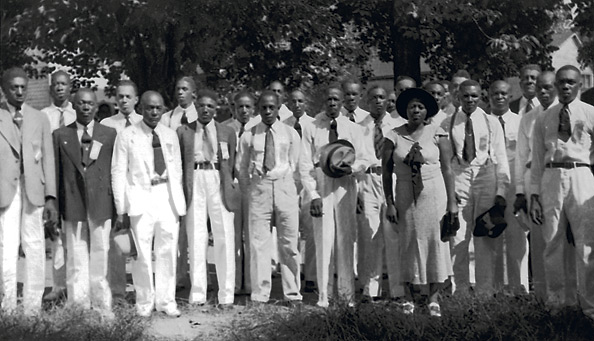 More insidious than the economic decline was the social rot from institutional racism.

Bertha Seavers has spent her entire life in Cairo. She was the first black person to work at the Cairo Public Library where she spent more than three decades. In her 86 years, she never saw the glory of Cairo in the same way that many did in the town. Instead, she saw segregation and humiliation.

“We saw some really good movies here, but you always saw them in the back of the theater,” Seavers said. “And we had a lot of taverns in town. But there were always white taverns, and then there were black taverns. The two never mingled. It was humiliating, but as kids, I guess we didn’t really think about it. It was just the way things were.”

Newspaper articles also reflect some of the racial tension of the times.

Among the advertisements for “the finest fruit jars in Illinois,” in 1910 a “negro woman” is killed in a street car collision. Surrounded by columns dedicated to answering teenage girls angry at their mothers or frustrated housewives asking how to make their husbands stop snoring, there are headlines such as “the negroes” attacking “a white girl” in east Cairo.

In 1910, just a year after the barbaric lynching in the center of the town, there was a second attempted lynching. Whites restricted black voting in the little town just outside of Cairo called Future City. Three years later, whites changed to at-large elections rather than wards, a scheme designed to make sure blacks weren’t elected. In 1918, Cairo formed a NAACP chapter, but a black person would not sit in city government until 1980 when the U.S. Supreme Court ruled that the city was violating voting rights laws and had to return to ward elections.

Mild disturbances continued in Cairo until one night, a black soldier died in a Cairo jail.