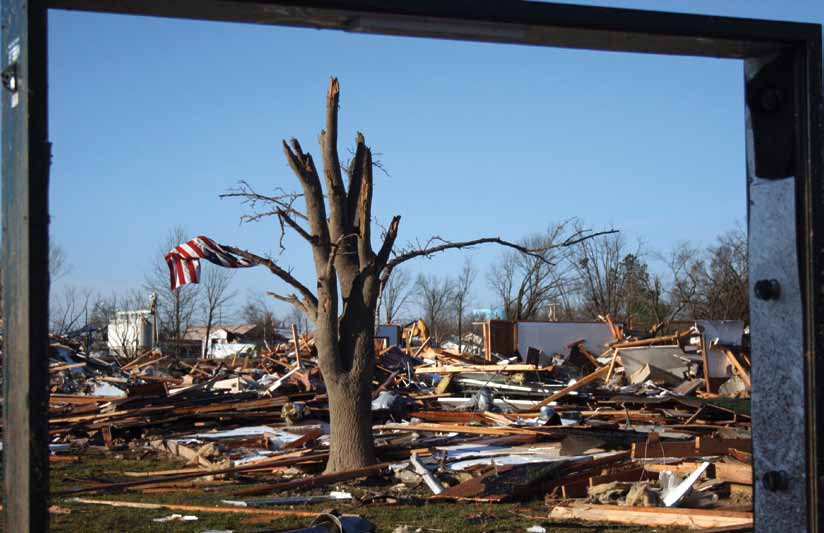 Siren Sounds in a Sleeping Town

Rick Mallady, Harrisburg’s emergency management agency coordinator and a city firefighter, had been tracking the massive storm system on his home computer as it made its way across the Midwest. Kelly Hooper, an incident meteorologist for the National Weather Service in Paducah, Ky., had kept in close touch with emergency officials.
“We knew a day or so ahead of time that environmental conditions were favorable for major tornadic activity,” he said.

At about 4 a.m. Mallady left his house and joined Chief Summers and the two fire fighters on duty, Jim Jones and John Quisenberry, at the fire station. Summers had heard from weather spotters in Goreville and Creal Springs, southwest of Harrisburg, that a dangerous storm was approaching.

Shortly after 4:30 a.m., Mallady directed Quisenberry to activate the four outdoor sirens, alerting the city’s residents of the rapidly approaching tornado. Then Mallady, Summers and a third firefighter, Brandon Culkin, jumped in their vehicles and drove off in different directions to watch for the tornado. They never saw it.

Summers positioned himself on Highway 13 and looked westward toward Marion. He was standing next to his car studying the churning sky when he noticed a difference in the quality of the air, a “deathly quiet.”
“I couldn’t get to the car fast enough.”

Meanwhile, Tracy Felty, a lieutenant in the Saline County Sheriff ’s Department and director of the Saline County 9-1-1 center,was driving on Highway 45 northeast of Stonefort when he saw flashes of light in the sky as the tornado hit transformers north of Carrier Mills at 4:51 a.m. Five minutes later, the tornado smashed into the south side of Harrisburg seven milesto the northeast, destroying a section of Dorrisville before it skipped across Highway 45 and began its deadly attack on the Gaskins City neighborhood.

Several minutes later, it left Saline County and crashed into the small Gallatin County village of Ridgway at 5:10 a.m., destroying the town’s century-old Catholic Church and damaging 140 homes and businesses. Twelve were injured, one critically.  It took less than 20 minutes for the 275-yard-wide tornado, whose wind speed reached 180 mph, to travel a 26.5 mile pathfrom Carrier Mills to Ridgway.

Felty reached Harrisburg minutes after the tornado touched down and thought it looked “like a bomb went off.”

“I saw a building sitting in the middle of 45,” Felty said. “I tried to figure it out, then I realized it was Energy Mart.”

As he scanned the scene, he saw debris from the Golden Circle and Dream Baskets buildings strewn over the highway. The
Golden Circle is a large nutrition center for seniors. At noon it would have had 100 people eating lunch.

“Then I thought, ‘Where’s the Lutheran Church?’ The brick church was gone,” Felty said.

Chief Summers returned to town to see that “the power lines looked likespaghetti.”

Mayor Gregg had gone to bed knowing there was a possibility of severe weather. But he thought, “It has always gone over us
and around us but never hit us.”

Gregg awoke before the storm hit and sent his wife and youngest son to the neighbor’s house as he collected family heirlooms. Then silence fell as the rain stopped.

“The sirens were still blaring and the city radio was going off and we could hear officers saying it had touched down and there was devastation,” he said. “It was the most horrible feeling you could possibly have because of the looming danger that was upon us. It really became our worst nightmare.”