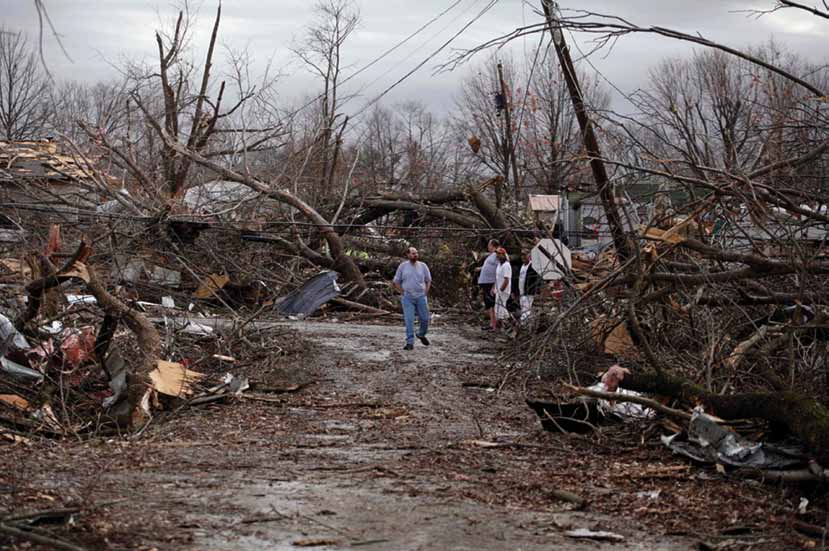 “You Could Hear a Pin Drop”

Before dawn on Leap Day 2012, an eerie stillness fell on Harrisburg, Ill.

“The wind quit blowing and it turned deathly quiet,” recalled Fire Chief Bill Summers, who was standing outside his car on Highway 13 watching fora tornado. “You could hear a pin drop.”

Mayor Eric Gregg heard the eerie silence too as he shoved heirlooms under the bed. Moments later, at 4:56 a.m., an EF-4 tornado, unseen in a veil of rain, descended on the small, sleeping town killing six and injuring 100, two so badly that they died later.

And then the tornado was gone.

“It was here and gone in a flash,” said Joy Emery, a longtime resident.

Kim Dunn, who worked at the hospital, hurried home to locate her family, but debris blocked her car. She got out to walk.

“The really weird part was hearing people yell for help everywhere and you couldn’t see anybody,” she said.

Once the sun rose, the damage was worse than imagined.

More than 200 homes and about 25 businesses were destroyed or heavily damaged.  A strip mall on Highway 45 was completely leveled.

But even before sunrise, Harrisburg had begun to pick itself up.

Diana Turner climbed out of a pile of rubble after her trailer home blew away. She never had to call for help.

“Everybody just showed up,” she said.

As Mayor Gregg put it, “People in this community did not run from this devastation, they ran to it.  And the reason they ran to it was to help others.”