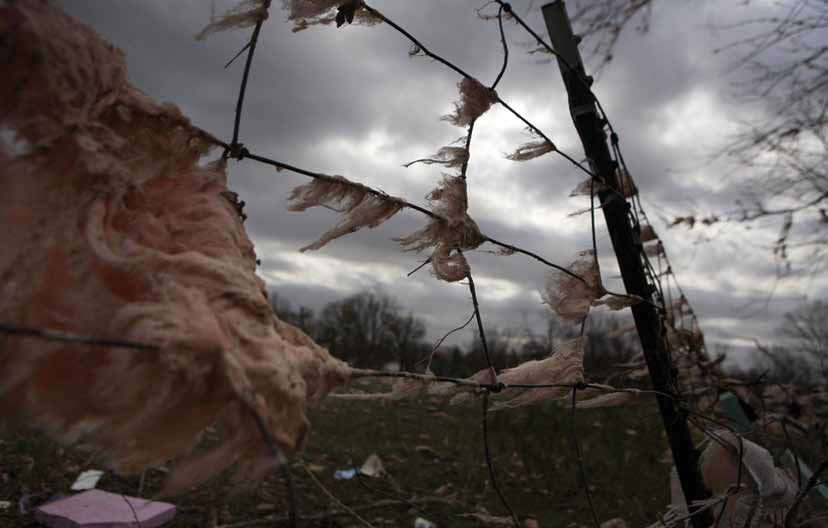 Ron Patterson heard cries for help as he emerged from his own damaged house in Dorrisville, on the southwestside of Harrisburg. He grabbed a flashlight and walked toward the cries in the inky darkness. His neighbor, Utha Angelly, and her friend, Jane Buti, who was visiting from Terre Haute, Ind., were trapped beneath Angelly’s house.

“My flashlight went dead, so I told her to keep hollering,” Patterson said. “I couldn’t see anything, but I finally found Utha and her friend, and carried them out and back to our house.”

Neither woman had serious injuries.

About the same time, Roy Mauney was searching through debris in the Gaskins City subdivision for his parents. He had been getting ready for work when one of his neighbors burst into his house and told him he needed to get to his parents right away. Mauney made his way to Texas Street and saw that his parents’ house had been torn from its foundation and flung into another dwelling nearly 100 feet away.

“It was dark and windy. There were gas leaks and power lines down everywhere,” Mauney said. “We could hear them – we could hear my mother calling,” he said. “I kind of dropped to the ground and began looking for them.”
He found his parents Rebecca and Blaine Mauney lying in their bathtub in a three-foot hole, both suffering from serious injuries. Rebecca recovered, but Blaine died May 31.

At the Harrisburg Medical Center, Kim Dunn had been pulling into work when she heard tornado sirens. She called her husband but couldn’t reach him. Then she noticed a wall missing from the hospital. But she never spotted the tornado.

She set off to find her family but could not drive down a nearby street blocked by debris. So she parked, grabbed a flashlight and tried to walk home, hearing people crying out for help but not seeing them. Dunn helped one neighbor to safety before continuing down the road to find her husband, son and mother unharmed.

Their house was a mess. Half the carport was flattened, parts of the roof were missing and ceiling tiles had fallen inside the house. Nearby, jars of spaghetti sauce, salsa and pie filling – most of them unbroken - lay scattered along the road. Clothing and sheets rustled in smashed windows and pink insulation covered trees. Some homes looked like dollhouses with walls ripped off leaving the contents visible. Family photos, clothing, dishes – everything that makes a home – were scattered to the winds.

When Diana Turner’s mobile home was destroyed, she found herself in a pile of debris. The storm had thrown her husband, Charles, about 50 feet away and dumped a cabinet on top of him.

But Turner didn’t have to call for help. Bonnie Mahan, a Harrisburg Lake resident and family friend, had heard what happened and drove there immediately. Last year the Turners had helped her when the area around her home was flooded.

Charles was taken to the hospital but released shortly after with minor scrapes and bruises.

On Roosevelt Street, Greg Thomas was just shutting his basement door when his wife, Lisa, pulled him down the stairs.  Moments later, the roof blew off. As soon as the winds died down, Thomas grabbed his generator and took it to his neighbor’s house.

“It was great that he thought to bring over the generator,” said Wayne Edwards, whose grandson uses a ventilator.

Allan Ninness, director of the Saline County Emergency Management Agency, said 3,000 volunteers helped during the three weeks after the storm. When 20 coal miners trained in underground search-and-rescue operations arrived from Willow Grove and other nearby Peabody Energy Company mines, suited up and ready to work, Chief Summers said he felt an overwhelming sense of relief.

“Seeing those miners was the biggest lift I got all day long,” Summers said.

Ameren crews arrived quickly to work on the dangerous downed electric lines. At one point there were 200 Ameren trucks on the scene.

More than 2,000 volunteers showed up on the Saturday after the tornado to help. The Harrisburg Ministerial Alliance organized a worship and prayer service at the high school for those grieving their losses. The group raised more than $6,000 for the disaster relief fund.

Although the 78-bed Harrisburg Medical Center was damaged, no one in the building was injured. It remained open and treated scores of the injured. Felty said officials set up a staging area so medical evacuation helicopters fromLifeFlight of Evansville, Ind. and Arch Air Medical Service of St. Louis could transport seriously injured people to larger hospitals.

One entity that did not shoulder a major cleanup burden – the federal government.  Twice it rejected Harrisburg’s request for federal disaster aid, saying the uninsured damages did not meet the required threshold.