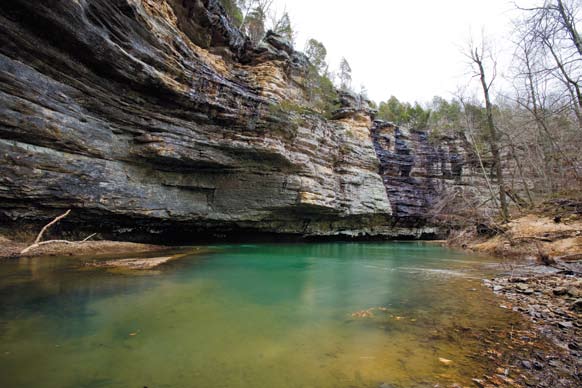 The National Natural Landmarks program was established in 1962 to recognize and encourage the conservation of outstanding examples of the United States’ natural history. The Secretary of the Interior designates the landmarks, and to date fewer than 600 sites have been designated. Of those 600, eight are located within or very near the Shawnee National Forest.

The Little Grand Canyon Area was designated as a National Natural Landmark in February of 1980. It consists of a series of steep valleys and a single main canyon carved by a tributary of the Big Muddy River. A well-marked trail winds 3.5 miles through the canyon and along the cliffs that tower overhead. The trail offers some spectacular views of numerous waterfalls, sandstone rock formations, and breathtaking vistas – one of which gives you a view of Fountain Bluff, the Big Muddy River, and even the Mississippi River on a very clear day.

Heron Pond-Little Black Slough Natural Area holds the largest remaining and northernmost tupelo-cypress swamp in Illinois. The state natural area in which it lies was carved out by glacial floodwaters that left behind the meandering Cache River. The Upper Cache feeds into Heron Pond, supporting ancient cypress trees and wildly diverse animal life. The area is best accessed on foot, as fallen trees and bank erosion make canoeing next to impossible.

The Lower Cache River Swamp is also known as Bottomland Swamp. The swamp is fed by the Lower Cache and, in contrast to Heron Pond, features wide-open expanses of deep water spread across a broad floodplain between the towns of Karnak and Ullin. There are a few stands of ancient cypress trees dotted through the swamp, and tupelo and buttonbush thickets occur in shallow areas. Six miles of canoe trails wind through this area, and paddlers will pass by the state champion bald cypress tree.

LaRue-Pine Hills Ecological Area is well known amongst herpetologists as the site of the biannual snake migration. It is also considered “one of the finest assemblages of diverse vegetation in the Midwest,” by the National Park Service. Steep bluffs, dry and mesic forests, prairies, swamps and ponds all meet within a roughly threesquare mile area.

Just east of Eddyville, Ill., is Lusk Creek Canyon. Many rare plants thrive within the canyon’s cool depths, including 13 species of orchids. Ten endangered or threatened Illinois plant species are also found within the canyon, which was carved out of lower Pennsylvanian sandstone by erosive processes like mass wasting and undercutting.

One of a cluster of National Natural Landmarks designated in Illinois during 1972, Horseshoe Lake Nature Preserve is first and foremost a sanctuary for Canada geese. Approximately 150,000 geese winter at the site, up from 1,000 in 1928 when the park first opened. Bald cypress trees line the edges of the lake, a cutoff meander loop of the Mississippi River.

Giant City Ecological Area is named for its unusual sandstone formations, which were said to resemble streets and buildings to early settlers. Hiking and equestrian trails thread through the park, but traffic through the “city” is limited to pedestrians.