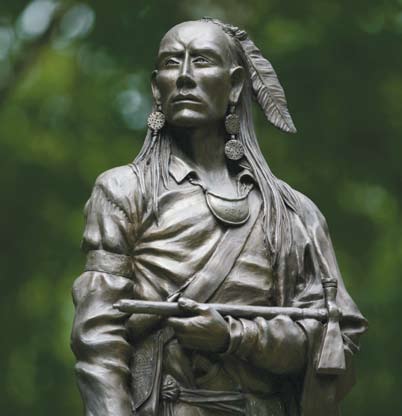 Story and Photo by Jake Lockard

The Shawnee National Forest takes its name from the Shawnee Indians. Purchased as two separate units of land in the early 1930s, it was declared a natural conservation area by President Franklin D. Roosevelt in September 1939. The Shawnee tribe had a long history in Southern Illinois. The Shawnee lived in “Shawnee towns,” which could be found anywhere from Northern Ohio to the convergence of the Mississippi and Ohio rivers at the southern tip of Illinois. Tecumseh, Chief of the Shawnee, was part of the Indian resistance until his death in Canada at the battle of Thames in 1813. John Sugden, author of the book “Tecumseh,” saw the legendary chief’s death as the closing chapter in the era during which Indians were fighting to decide the future of North American lands.

“With his defeat an era in Indian history—the period during which the tribes had helped decide the fate of great international powers struggling to possess North America — came to an end. Yet such was the impression Tecumseh made, upon grateful friends, beaten allies, and victorious enemies alike, that he lived on in folklore, story, and rhyme, at home and overseas, and became one of the most legendary figures of the American past,” Sugden wrote.

Tecumseh’s goal was to unite the Indians of North America from the Great Lakes to the Gulf of Mexico. He believed that all Indians were in danger of losing their lands and cultures to the encroaching white settlers, and should unite to fight them off. Planning an Indian confederation was no easy task because Indians were divided by culture and language, and were politically decentralized.

On his quest for unity, Tecumseh used a bundle of green sticks to represent the strength of his proposed Indian confederation. You can break one stick but you cannot break the bundle. Tecumseh is recognized by many Native Americans as the most outgoing of the handful of Indian chiefs who dreamt of an Indian Confederation capable of setting aside intertribal indifference and resisting white expansion.

Today, a life-size, full bronze statue of Tecumseh stands tall in the Shawnee Forest largely because of the efforts of local historian and conservationist John O’Dell.

“The Shawnee had a long history in Southern Illinois,” O’Dell said. “We wanted to do something to commemorate the Shawnee and to get people interested. When we started reading about it, Tecumseh had an untold story.”

The sculpture, in the Saline County ConservationArea, is the only bronze monument ever made of the chief. A lot of planning went into the sculpture.O’Dell said he was in contact with Don Greenfeather, a descendent of the Shawnee, for advice as the sculpture was being crafted.

“I would call Don Greenfeather and say, ‘I want you to take a look at this statue and tell us if there’s something wrong,’” O’Dell said.

“He said the most important thing is ‘don’t have Plains Indian moccasins, have centerseam moccasins.’”

O’Dell worked with artist Tom Allen to make sure that the sculpture was as historically accurate as possible.

“We told the artist that we wanted him posed like a statesman,” O’Dell said. “That’s why he has the blanket on him, that’s the posture of a diplomat.”

The sculpture was also given a bundle of sticks and the possessions of a hunter, including a tomahawk and hunting knife.

“The tomahawk is a peace pipe that you could smoke as well,” O’Dell said. “If you wanted to declare peace, you take your tomahawk and stick it in the ground and then you smoke it. That was burying the hatchet.”