The station also won awards in 2011 from the Illinois Associated Press for the Best Newscast, Outstanding News Operation, Best Spot News, and Best Videography. Steve Wheeler, general manager at WSIL, said that the different departments have to interact together to produce a live newscast, which is complex.

“There is a whole technical infrastructure that nobody even thinks about, because you don’t miss it till it’s gone, ” Wheeler said. “There is a great deal of teamwork.”

Edan Schultz, evening anchor at WSIL, said that members of all the departments, whether directly involved with the newsroom or not, have to communicate well with each other. Schultz began working with the WSIL team in 1995 and said since then, he’s gained more confidence.

“At first, I was a little shy and was pretty nervous to be on TV,” Schultz said. “The teams encourage you to have more assurance of yourself.”

Nick Hausen, weekend meteorologist, was originally trained in atmosphere sciences at the University of Missouri, but said he has learned to film video as well.

“You have to be able to do a number of different things that may not be fitting to your field,” Hausen said. “That’s what the team is all about, diversity.”

Earl Flanigan, senior engineer at WSIL, has maintained the 25 different satellites at the station for 15 years. “It’s very easy here and laid back,” Flanigan said. “Everybody gets along well – it’s almost like a family.” 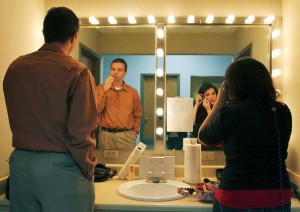