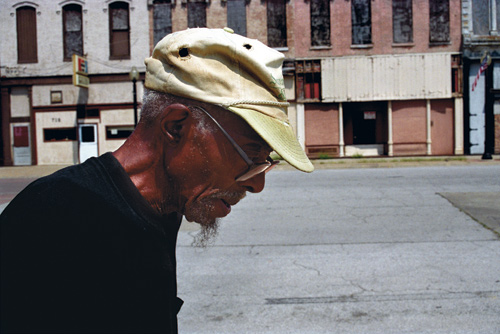 For seven semesters, Photojournalist-in Residence Phil Greer has sent his students to Cairo to record images of the life in that river city. The students returned with hundreds of vivid photos of faces and places – from little children playing in the street to seniors chatting over coffee, from the Civil War mansions of Magnolia Drive to the crumbling buildings of Commercial Avenues. The students have been in the homes, churches, restaurants, bars and social clubs of Cairo. Lasting relationships have been formed between the citizens of Cairo and the students. Misconceptions based on the past history of this river town have been struck down.

In 2007, the School of Journalism decided to marry the hundreds of vivid photos with in-depth reporting. Student journalists interviewed dozens of Cairo residents and dug up new information about decades-old events.

One student, Nathaniel Taylor, filed a Freedom of Information Act request to obtain the FBI files relating to the death of Pfc. Robert Hunt, who was found hanging in the Cairo jail in the summer of 1967. Pfc. Hunt’s death ignited a long and sometimes violent civil rights era in the town. The FBI files showed that the agency decided immediately after the death not to investigate the possibility of foul play for fear of inciting a civil disturbance.

Another story, this one by Jaclyn Brenning, described the dysfunction of town government. A third, by Jarel Loveless, described the difficulties of the Cairo public schools where the average ACT score is an abysmal 15 and where about 17 percent of the female students are pregnant or already mothers.

This report, prepared as the town celebrated its 150th birthday, is intended to tell Cairo’s story and to help Cairo’s proud residents chart their journey through the second half of the town’s second century.

We hope the people of Cairo will enjoy this work. We wish to thank them for being so open and forthcoming. Sometimes things change when a light is shone on problems in a community.