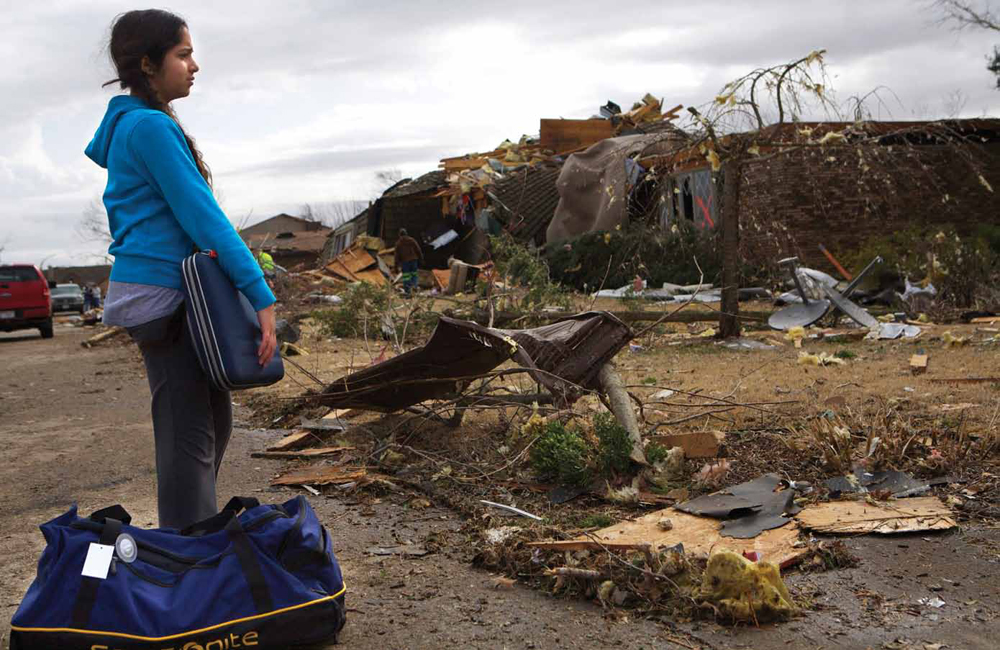 Just hours after a deadly tornado descended into Harrisburg, Ill. on Feb. 29, 2012, reporters and photographers from the Daily Egyptian arrived on the scene. The next day, their stories and pictures reported the story on the front page of the Chicago Tribune.

When the early rush of stories ended and national news organizations moved on, Journalist-in-Residence William Recktenwald reminded us that the story wasn’t over. It was beginning. While traveling through the town every day he saw the residents picking themselves up with remarkable determination. This book tells that story.

Students from the Daily Egyptian’s spring staff wrote the story and shot many of the images, supplemented by other student photojourmalists. Students Sharon Wittke, Lauren Leone and Steve Matzker worked into the summer. Recktenwald led the effort. Chancellor Rita Cheng heard about the project and advanced money for printing. Photography professors Mark Dolan and Phil Greer counseled students on the images and design. Public service is the highest form of journalism. Journalists are not detached from their communities, nor are universities. Journalists are the storytellers of their communities. This tragic event provided an opportunity for our students to see first hand what they only read about in the classroom.

But this book isn’t about us.

It is about the community in and around Harrisburg and Ridgway. This is the story of how our neighbors picked themselves up, buried their dead and rebuilt their lives.

The Leap Day Tornado – an Introduction

Devastation Before Dawn – Part 1   “You Could Hear a Pin Drop”

Devastation Before Dawn – Part 2  “Siren Sounds in a Sleeping Town”

Devastation Before Dawn – Part 4  “There’s Just Too Much Space”