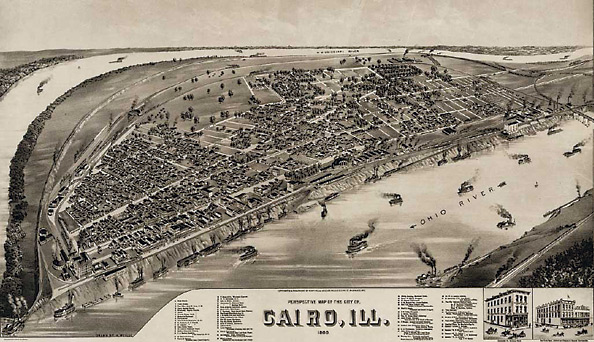 Dickens actually wrote about Cairo several years earlier in his American Notes, following his trip across the country in 1842. He was focused on the worst of times. He complained that Cairo was “a hotbed of disease, an ugly sepulcher, a grave uncheered by any gleam of promise: a place without one single quality, in earth or air or water, to commend it: such is this dismal Cairo.”

But the best of times was yet to come. Because of its location at the confluence of the Mississippi and Ohio rivers, Cairo was a place of promise.

Before the Civil War, Cairo was the southern tip of free soil. For Jim, in Mark Twain’s Huckleberry Finn, it was the Promised Land. “There weren’t nothing to do now but to look sharp for the town, and not pass it without seeing it,” wrote Twain. “He (Jim) said he would be mighty sure to see it, because he would be a free man the minute he seen it, but if he missed it he’d be in slave country again and no more show for freedom.”

The arrival of the railroad, followed three years later by the Civil War, gave the town its biggest boost in population and wealth. Camp Defiance, quickly built by Union troops at the confluence of the rivers at the start of the Civil War, became a vital strategic point for control of the rivers for both the Union army and inland navy. Ulysses Grant launched attacks into Kentucky and the South from Cairo.

The Civil War provided trade and wealth, exemplified by Riverlore Mansion, a plantation-style house built by Captain William Parker Halliday in 1865. Magnolia Manor, constructed in 1872, also embodies the wealth of this era. However, the demographics of Cairo had changed during the war. The population tripled to about 6,000 in 1870, with the black population of escaped and then freed slaves jumping from 50 to 3,000.

There were always the contradictions of best and worst. The best of Cairo was described in The Evening Citizen in 1909: “With the return of peace, Cairo was quick to exploit its wartime profits and the booming riverboat trade. The town became a curious mixture of violence and gentility, along the wharfs, saloons and gambling casinos catered to rough river men, while a discreet carriage ride away, the genteel sheltered in near-palatial mansions along ‘Millionaire’s Row.’ Lavish churches, opera houses, orchestras, hotels and monumental government buildings boasted of Cairo’s wealth. In 1886, combined river and rail shipments – evaluated at $60,000,000 – gave Cairo the highest per capita commercial valuation in the United States.’

But that same year of 1909 witnessed the worst as well. A black man was lynched after being arrested for the rape and murder of a white woman. Photos show the circus atmosphere of the hanging. News accounts described its barbarity: “(The mob) tried to hang him, but the rope broke; so they shot him, set his body afire, and mutilated it. They then beheaded the body, planting the head on a stake and carrying it to the main square on Commercial Street.”

A series of postcards depicted the event, including a photo of James’ half-burned head on a stake. It was an event referred to by Stace England in his CD Greetings from Cairo as the “equal opportunity lynch mob” because after Cairo citizens dragged from jail a black man accused of murdering a white woman, they then seized a white man who had been arrested for domestic battery and hanged him, too.

A troubled 20th Century lay ahead.